No trip to Myanmar is complete without visiting Mandalay, the cultural capital of the country. Mandalay offers everything you expect from Myanmar – scenic views, fascinating pagodas and monasteries, sumptuous local food and much more!

Mandalay has a rustic charm to it. Walk and explore the colourful buildings, sit at a teashop and spend some time talking to the locals, visit the tourist attractions – we guarantee a power-packed trip while you are in Mandalay. Travel north of downtown Mandalay and you will be able to visit the most visited tourist attraction of the city. Rising up to 230 meters above sea level, you will be awarded a breathtaking panoramic view of the surrounding when you climb up. There are elevators and escalators to assist your climb. The hill is dotted with plenty of pagodas and Buddhist temples. You can not miss the colourful processions that represent the people’s religious culture and traditions. A Camera fee of K 1000 is required. Please make sure to cover yourself and take off your shoes when you visit the hill. Nestled between 12th and 26th street, the Royal Palace of Mandalay is situated at the heart of the city. This impressive building is the last palace to be built by the Burmese royals. King Mindon Min ordered the new Royal Palace to be built when he founded Mandalay in 1857. The palace consists of various components such as 12 gates, Clock Tower, Watch Tower, Relic Tower, Hluttaw, Royal Mausoleums, Glass Palace and the Royal Mint. Explore the picturesque moats that encircle the citadel accompanied by multiple bridges that connect to the audience. Seeing the Royal Palace completely will take around 2-3 hours. You got to walk on the world’s longest wooden bridge, the U Bein Bridge when you are in Mandalay. Drive half an hour to reach Amarapura town to experience this one of its kind walk on the bridge built over Taung Tha Man Lake. The lake itself is unique as fishermen still catch fishes by wading waist-deep in muddy water. The bridge has been named after a clerk of Amarapura’s Mayor. The best time to visit this two-century-old teak bridge is during sunset to take amazing Instagram-worthy photos. The lake’s water level is at its highest during July and August when you can enjoy a relaxing boat ride on the lake. Athumashi Monastery is just a 10-minute drive from the Royal Palace. it was the last religious masterpiece built by King Mindon, but it was burnt down in 1890. The monastery was rebuilt in 1996 with an intention to replicate the grandeur of the earlier wooden structure. Shwe Kyaung monastery is an old wooden monastery which you can visit on your way to Mandalay Hill. It was originally the living quarters of King Mindon. Enjoy the intricate wooden carvings featuring motifs and mythical creatures surrounded by a teak platform supported on wooden pillars topped with beautiful marble lotus flowers.

A poem called “Mandalay” (which was the origin of the phrase “on the road to Mandalay”) was written by Rudyard Kipling in 1890. The poem was then used for a song called ‘On the Road to Mandalay’ in which the most notable rendition of the song was sung by Frank Sinatra on Come Fly With Me. The stunning Maha Myat Muni Buddha image is 4 metres high and weighs 6.5 tons, cast in bronze with a crown decorated with diamonds, rubies and sapphires. The image was brought by King Bodawpaya to Amarapura from Mrauk-U in 1785. It is now located at the Maha Myat Muni Pagoda. Locals and devotees gather at the pagoda especially to witness the cleansing ritual of Buddha’s face and placing gold leaves on the image. The tranquil atmosphere will calm you. We encourage you to meditate here. Every November, locals and Buddhists all over the world come to Mandalay to celebrate the Maha Myat Muni Buddha festival here. Eain Daw Yar Pagoda is a beautiful pagoda located on the 89th street to the west of the Zegyo. Rising to a height of 35 metres, the pagoda is covered with gold leaves. On a sunny day, you can see it shining from far away. The pagoda has a beautiful Buddha statue which was brought from India in 1839. This pagoda was a centre of the independence struggle of the Burmese people. While it is fascinating during day time, it is equally beautiful at night when the lights are turned on. Conveniently situated at the foot of Mandalay Hill, this pagoda is usually crowded with tourists who are on their way to visit the hill. It was built at the same time as the Royal Palace by King Mindon Min. Visit this pagoda to see the world’s largest book surrounded by 729 marble slabs inscribed with Buddhist teachings. If you want to read what’s written in them, it will take you approximately half a year. There is also a gilded pagoda, pavilions and hundreds of shrines in the same compound. The entrance fee of this pagoda is included in the overall Mandalay regional fee which is USD 10. If you visit Pyin U Lwin, don’t miss visiting this pagoda. You can witness the picturesque view of the pagoda from the top of the hill while you enjoy the cool breeze and fresh air. The pagoda has an interesting history. When three Buddha images sculpted with marble were transported to China, one of the statues fell. Since it was too heavy to be placed back into the truck, it was left behind. A monk stumbled upon the Buddha image and decided to rely on the power of faith to move the Buddha. He spent 7 days preaching by reciting the teachings of Buddha, using the location of the statue as his base. His efforts paid off, as Buddha was easily lifted and placed in its current location. Villagers still pray, meditate and pay their respects by giving offerings and donations here. While you visit Mandalay Hill, you will see the Kyauk Taw Gyi Pagoda and see Myanmar’s largest marble Buddha image. The stunning Buddha image is fully sculpted from a single block of the exquisite Sagyin marble, showcasing the amazing art form of Mandalay State. One of the country’s largest festivals, Kyauk Taw Gyi Pagoda is celebrated here every October. While the pagoda is pretty crowded during the festival, you can enjoy an authentic Myanmarese religious festival if you visit during this time. The entrance fee of this pagoda is included in the overall Mandalay regional fee which is USD 10. You cannot miss the Mingun Bell when you are in Myanmar. It is the world’s largest suspended and uncracked chiming bell. The gigantic bell was cast in 1790 and has survived more than 200 years of harsh weather. The bell was so big that two canals had to be flooded with water to lift it and be placed on teakwood support. This 12 feet tall bell with a diameter of 16 feet 3 inches, creates an impressive view. Head south from the bell to the Mingun Pathodawgyi pagoda which overlooks the river. You can pay USD 4 and visit this pagoda, the Mingun bell as well as Hsinbyume Pagoda and Kaunghmudaw Pagoda. 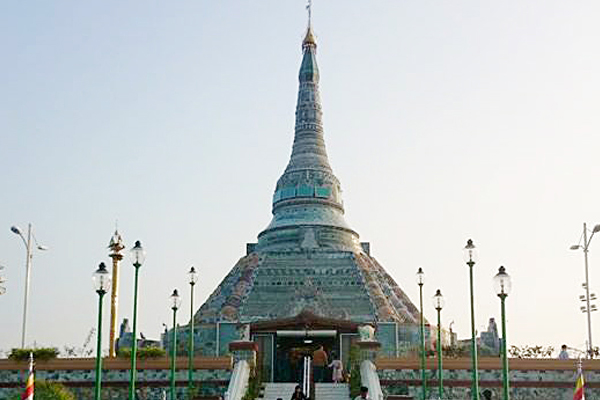 The stunning jade pagoda is the world’s first and largest jade pagoda. The pagoda was built with jade pieces and slabs and costing around USD 15 million. Completed in 2016, the pagoda is 75 feet 6 inches tall, 175 feet in circumference and each of its terraces is 12 feet tall and the umbrella is 7 feet in height. 30 thousand jade Buddha statues line the pagoda’s surface. Tourists can easily access the pagoda as it is built on a hilltop which is accessible by the Mandalay-Yangon Highway. Join the locals at this pagoda as they pay their respects to receive peace and good fortune in return. Planned a day trip to Innwa? Head six miles west and you can see the Kaungmudaw Pagoda or Yaza Mani Sula that was built by King Thalun and his son in A.D 1636. The pagoda dons an unusual egg-shaped design, sparking wonders in tourists who have seen the pagoda. In the egg-styled design resides an enormous dome which rises up to 46 metres. There are 812 hollowed stone pillars that contain images of Nat in them. The pagoda dome used to be painted in white all the time to symbolise purity but as time went by, villagers began gilding the structure with gold. Don’t miss the chance to look at ancient Buddha relics kept inside a relic chamber. The entrance fee of this pagoda is included in the Mingun Sagaing Zone fee which also includes a visit to the Mingun Bell, Sagaing Hill and Hsinbyume Pagoda.