To receive a UNESCO listing is a great honour and reflection of the rich heritage and culture of Myanmar. UNESCO includes in its lists cultural and natural sites of extraordinary importance that need to be safeguarded for the benefit of present and future generations. A number of sites in Myanmar are part of the UNESCO listings. Please see the listings below:

UNESCO provides the World Heritage designation to cultural and natural sites that are of invaluable importance to humanity and need to be protected for the sake of future generations. At present, Myanmar has 2 sites included in this list – Bagan, added in 2019, and Pyu Ancient Cities, included in 2014. In central Myanmar, about 290 kilometres southwest of Mandalay and 700 kilometres north of Yangon.

Bagan is well connected by road and air from the rest of the country. You can also take a ferry from Mandalay to Bagan, which will travel along the Ayeyarwady river. It is the most enjoyable way to get to this historic city.

The newest entrant to the prestigious UNESCO World Heritage List, Bagan is a town with approximately 2,000 temples dating back to 9th–13th centuries. During this time, the town was the capital of the Pagan empire, and about 10,000 temples were built. The temples have endured difficult times in history, surviving terrible earthquakes and other natural calamities. Today, 2,000 of them remain, big and small, which are of tremendous historical importance. These cities are well connected to all the major cities of the country by road. You can hire a taxi or travel by bus to see the cities. Halin is in the Sagaing Division, Beikthano is in the Magway Division and Sri Ksetra is in the Bago Region. There are specialised tours that take you around the towns, explaining the history of the place.

The three Pyu ancient cities of Halin, Beikthano and Sri Ksetra have been designated as UNESCO World Heritage Sites. They are remnants of the golden days of the Pyu Kingdoms, which flourished from 200 BC to 900 AD. The cities were founded once the Tibeto-Burman-speaking Pyu people migrated southward and created settlements on the banks of the Ayeyarwady River. Starting off as villages, the settlements slowly grew into urban areas with fortifications and central palaces. Soon, they became a centre for Theravada Buddhism. Today, you can see the remnants of these towns – palace structures, broken walls and evidence of human settlement.

UNESCO initiated the Man and the Biosphere Programme to establish a scientific basis for the sustainable use and conservation of biological diversity, with the ultimate aim of improving the relationship between people and their environments. As part of the effort, various sites across the world are identified as Biosphere Reserves. At present, two natural sites of Myanmar have been included in UNESCO’s World Network of Biosphere Reserves – Inle Lake in 2015 and Indawgyi in 2017. Located in Shan State, Inle Lake is the second largest lake in Myanmar.

Inle Lake can be reached by road, train and flight. Heho Airport is the nearest airport from Inle, which is well connected to the rest of the country. It can also be reached by bus from Yangon (12 hours), Mandalay (9 hours) or Bagan (9 hours). The train from Yangon leaves for Inle Lake at 11 AM every day.

Inle Lake is a self-sustaining ecosystem surrounded by picturesque mountains. It is home to several ethnic groups whose livelihoods depend on the lake and its shores. The lake shows distinctive features such as internal navigation, floating vegetable gardens, floating villages and waterways. At least 267 species of birds – of which 82 are wetland birds – 43 species of freshwater fish, otters and turtles can be found in the lake and the surrounding banks. 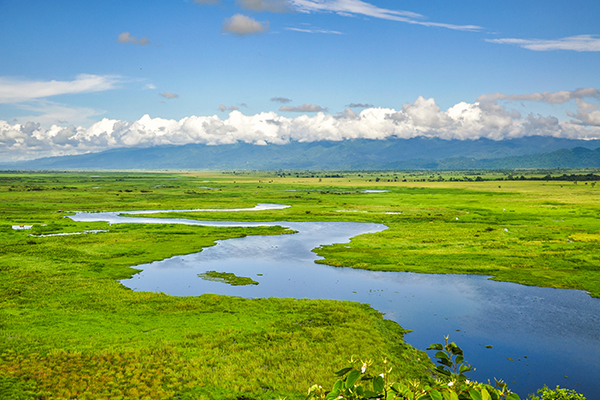 Indawgyi Lake can be reached by train, road and flight. The easiest way to reach Indawgyi is by flying to Myitkina in Kachin State and taking a taxi from there. Buses are also available from all the major locations of the country.

This biosphere reserve is home to 10 globally threatened bird species and a major stop for migratory birds from November to February. According to surveys, there are 448 bird species, 41 reptiles, 34 amphibians, 64 species of fish and 50 species of butterflies in this reserve. Reports reveal the presence of white-rumped vulture and slender-billed vultures in the forests.

MEMORY OF THE WORLD REGISTER

The Memory of the World Programme by UNESCO has been conceptualised to safeguard, protect and facilitate access to and usage of documentary heritage such as texts, non-textual items, and audiovisual and electronic files that are of significance to the world. At present, Myanmar has 4 sites listed in this programme. LOCATION: At the foot of Mandalay Hill in Mandalay city. HOW TO GET THERE: Mandalay Hill is located 10 kilometres away from Mandalay city. You can drive down National Highway 31 to reach Mandalay Hill. The Kuthodow Inscription Shrine was included in the UNESCO Memory of the World Register in 2013. It is a collection of 729 inscribed stone slabs where all the Buddhist scriptures are inscribed. These inscriptions are of tremendous religious and social significance in Asia. They also record the 5th great religious congregation convened by King Mindon – a significant event in Buddhism. The Golden Letter of the Burmese King Alaungphaya to King George II of Great Britain from the year 1756 is a unique attestation in world history as well as in the history of Burma and Europe in the eighteenth century and is of outstanding aesthetic value. The content of the letter is a trade proposal from Alaungphaya to the English. By granting them a base in a favorable situation he would provide them with a strategic advantage over the rival French interest in exchange for military support against his enemies. The text was engraved on pure gold; the gold leaf decorated with 24 rubies is the sole surviving golden letter from Burma. LOCATION: Bagan Archaeological Museum, Bagan, Mandalay Region HOW TO GET THERE: Bagan Archeological Museum is located 9.8 kilometres from the Nyaung U Airport. You can reach the museum from central Bagan by an e-bike, bicycle or vehicle. You can simply take a walk too. This site has been included in the UNESCO Memory of the World Register since 2015. It is an inscription dating back to 1113 AD and is the oldest surviving stone incription of the country. The inscriptions are made in 4 languages – Burmese, Pyu, Mon and Pali – and tell the story of Prince Yazakumar and King Kyansittha. You cannot miss this if you are visiting Bagan. LOCATION: The bell is located at Shwezigon Pagoda in the town of Nyaung U, near Bagan. HOW TO GET THERE: Nyaung U is located 10 kilometres away from Bagan and can be reached via private vehicles and public transport. This was included in the UNESCO Memory of the World Register in 2017. The inscriptions, made in 3 languages, contain the donations made for Buddhist religious merit. The massive bell is 3 feet and 8 inches high and 6 inches thick, with inscriptions in the Myanmar, Mon and Pali languages above the neck and below the hanger. The cast of the bell was donated to the pagoda in 1557. You cannot miss this bell when you visit Shwezigon Pagoda.